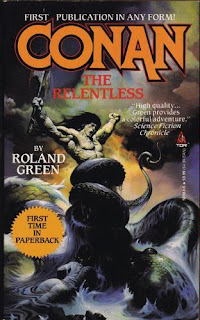 Conan's story picks up with him entering the Border Kingdoms, briefly recapping the events which transpired on snow devil glacier and Conan's run in with the Ice Worm, and contemplates joining a bandit group to raid a caravan. Conan hears the bandits speaking of a certain personage with whom he is familiar. Raihna. This woman, whom Conan had last seen during an adventure in the Illbars mountains (Conan the Valiant, also by Green) directly preceding his exile from Turan (Conan and the Spider-God, DeCamp) and his return to Cimmeria (Conan the Valorous, John Roberts) is apparently in command of the guards of the soon to be raided caravan. Now Conan is curious as to what this woman is doing so far from her typical haunts, and aims to find out. He turns down the bandits and opts instead to side with Raihna and her caravan guards, soon fighting his way through the bandits to her side in battle.

Before long they are journeying together, and telling one another of the things which have occurred in the year since they parted company. It doesn't take long before the two adventurers are embroiled in court intrigues with the pauper lord of the border realms, King Eloikis. Though Conan wonders what in the border realms is worth calling a kingdom, the people themselves seem proud in spite of their deprivation. Raihna and Conan are informed that the King's got a problem, and It seems one of the local Counts, and a pair of demon summoning wizards are involved. Eloikis wishes the adventurers to deal with this problem for him in the most expeditious way possible.

Over the course of the next 200 pages or so, Conan and Raihna find themselves involved in a series of incidents which without fail leave Conan ample opportunity, and energy to cavort with his female counterpart. They engage in all manner of exploits, culminating in rescuing the King's daughter, and his new grandson. Over the course of the story Raihna realizes that she has come to love one of the King's guards and opts to stay in the Border Kingdom, poor as it may be, with him rather than continue southwards with Conan. She takes her position in the new Queen's court, and bids Conan Adieu as he turns his sights to the sunny south once more.

In the end, this was not a bad little story. As with most of the Pastiches, it was to long for the scanty plot which it was built around, and like most it would have been better served to come to the 130-150 page mark rather than the obligatory 270+ Page mark. The story was especially interesting in that it reintroduced a character we had seen previously, adding a lot to her character, and then wraps her story up with a nice conclusion.  The story also was very easy to place chronologically due to the author taking steps to give clear markers as to where the story fit. Plot wise there wasn't a whole lot going on that we haven't seen before. It felt like mostly what it was, filler, but decent filler rather than horrid filler. So far it's the second Roland J. Green that I've read and I'm just not seeing what is supposedly so offensive about the guy's writing. Sure, he's not John Maddox Roberts or even Robert Jordan.. but he's far superior to Leonard Carpenter or Steve Perry.

Up next is Conan the Savage by Leonard Carpenter.
Posted by Lagomorph Rex at 3:46 PM 2 comments: Links to this post