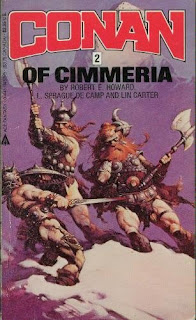 Conan, following his adventures with the Bamulas is on the run again. Not from a human adversary but from a pride of Lions. He takes shelter in an abandoned castle and soon finds there is more the ruin than meets the eye.  Thousands of lost souls begin to make their presence known before ultimately coalescing into a multi limbed monstrosity and doing battle with a troop of Stygian slavers who have also stumbled upon the deserted keep. The squamous and horrid creature quickly tears all but one of the slavers to shreds, stopping at simply driving that one insane. Conan, realizing he has no desire to finish his life on so ignominious an end, decides that discretion is the better part of valor and since the slavers won't be needing their horses simply takes one and makes his way away from the keep.

This was not a bad story, benefiting from not being long, but really didn't do much to improve the readers view of Conan the man if read immediately following Vale of Lost Women. It also re-used a lot of the tropes that DeCamp & Carter are well known for.. but the monstrosity had me feeling like I was watching a Hyborean age version of John Carpenter's The Thing.

Up Next, "The Snout in the Dark" By Robert E. Howard and L. Sprague DeCamp

I always liked this one. The strange building had a nice, creepy, Lovecraftian feel to it and there's a nice build up to the appearance of the monster. I'd put this in my top five from Lin and Sprague.