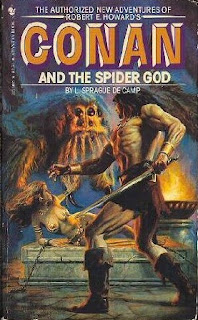 After many years and no small number of daring feats, Conan has finally made it to the royal guard of King Yildiz. This entitles him to a number of things, being close to certain royal personages. Tonight for instance, he is to spend the evening with a certain Lady Narkia. As usual in Conan's life, things don't go quite as planned. Her protector, High Captain Orkhan, bursts in on them. Conan slays the man out of necessity, and then flees the ladies chambers. He must escape Agraphur, make his way to safety.

Telling the man in the stables that he is riding out to deliver an urgent message to Khauran, Conan soon turns north and heads towards the Marshes of Mehan instead. For three days he trudges through the marshes, thankfully seeing neither hide nor hair of the dread Swamp Cat. Soon however he hears the screaming of a horse, going to investigates finds that others have not been so lucky as to escape the notice of the giant feline. Conan dispatches the beast, and then accepts the hospitality of the travelers whom he delivered. He plans to head out early the next day, and so gets himself bedded down before long.

He awakes the next day to find that the "Travelers" have stolen his horse. Cursing he sets out across the marshes on foot. Four days pass, Conan finally arrives in Sultanapoor. He seeks out an acquaintance he had there. The seer whom he has gone to visit, spends some time helping Conan concoct a new identity. They settle on Nial, which was Conan's fathers name. The seer also takes some time to explain to Conan a new science, arithmetic. The Following day, Conan purchases a horse and sets out westward.

He soon comes to Shadizar, and learns of work in the northern Zamoran city of Yezud. This rings a bell, Yezud is the home of the Spider worshiping cult of Zath. (Which if you remember, Conan tangled with way back in Conan the Defiant) On his way he rides through the town of Zamindi, finding an old lady being menaces by a mob, he stops to assist her. Soon the mob turns on him as well, and he takes the old lady and they flee the town. Still going north, they stop at her hiding place in the hills, and she tells him somewhat of the history of the area. The next day, Conan continues on and reaches the city in the crags, Yezud.
Posted by Lagomorph Rex at 2:51 PM