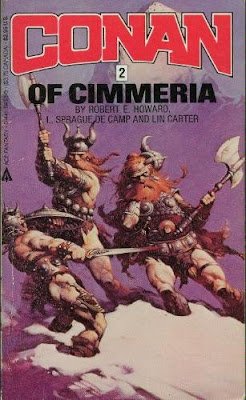 When this story opens, we find Conan in Arenjun. He's chased some one there who took something from him. A stolen treasure map. This particular map leads to the temple of the blood-stained god. He finds several men torturing the one who stole his map, and interferes in their sport. In the confusion though he is knocked out, and the men who now have the map manage to escape on the trail of the blood-stained god.

Conan comes across another man, who is also seeking the treasure. The two join forces and set out south into the most forbidding reaches of the Kezankian mountains. It's a treacherous area sandwiched between Zamora and Koth, and also claimed by Turan. They reach it in a few days, and make their way into the mountains. Soon they have found the men who took the map, and make short work of them. Now all thats left is for them to find the treasure.

Deeper and deeper into the mountains they trek. Until eventually they come across a disguised door. Entering the chamber behind the door, they soon come face to face with the blood-stained god. Near the pedestal on which the god sits is a large and very deep pit. Probably where the priests threw the victims they sacrificed to the large gold, ruby encrusted idol. All is not as it seems however.

Upon approaching the idol, It moves. Standing up to its full height, The Blood-Stained God takes a few faltering steps towards Conan. He picks up a large piece of wood and slams the construct in the back, forcing it to lose balance and fall into the pit. With the endless wealth lost forever, Conan heads out into the morning sunshine and sets out for further adventures.

This was a decent enough Conan tale. But of course, It's not really a Conan tale. It started out as a Kirby O'Donnel Tale and was set in Afghanistan, called 'Curse of the Crimson God'. L. Sprague DeCamp, in his haste to have more Conan yarns from which to reap rewards, altered the tale and made it into a Conan tale.

Though it really says a lot about both DeCamp and Howard that this tale worked. It shows that, Howard's writing is high quality and very adaptable (take note Hollywood!)no matter the venue or setting. It also shows how little respect DeCamp had for Howard's work, that he felt that all of Howard's characters were so one-dimensional you could simply substitute one for another. It worked this time. I think he did four that way, but this one was one of the best. One of the later ones, which we will not get too for some time, he left quite a few anachronisms present that really showed that it wasn't a true Conan yarn.

It also makes for a nice counterpoint to one of the earliest tales in the Conan Pastiche world too. The Thing in the Crypt, also featured a statue which comes to life. When taken with the Cult of Zath from Conan and the Spider-god, it really does feel as if a Chapter is looping back around to close in on itself in the life of Conan, which will completely lock tight when Conan returns to his homeland of Cimmeria in his next adventure.

Up Next, Conan the Valerous by John Maddox Roberts
Posted by Lagomorph Rex at 9:36 AM