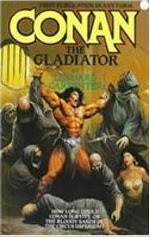 Conan, newly returned to civilization following his adventures in the Southern Kingdoms and Kush, now finds himself in the Shemite city of Thujara with his money running low. Before long he is caught up with a circus troop in need of a strong man to wrestle with local toughs in order to make bets. They are made an offer to journey to Stygia to perform. After some travel they arrive in Stygia and do their circus and by the end of their period there one of the circus performers has become a new leader in Stygia, and then Conan leaves.

Honestly, that's a complete summary of the entire novel. Vastly simplified, but theres really not much else that happened. It was an entertaining enough book, but it could have been a much smaller short story.. it's so padded with examples of circus life and his interactions with the other circus performers. It's not got much going for it in terms of Conan's character, but thats nothing knew for Carpenter as a writer.. however.. next we get to the major problem with this book.

I just want to point out, that the placement of this book in this Chronology, proves one thing. That Conan has GIANT BRASS BALLS.. they are so big, I'm surprised he can even walk. The reason I say this is simple, He GOES TO STYGIA, and LOOKS JUST LIKE AMRA, and he does all of this AFTER having spent years, one; foiling Stygian plots, two; raiding Stygian ships, three; after leading a raid into the very heart of Stygia and four; running afoul of numerous Stygian nobles and priests all over the Hyborean Continent.. And he does all of this.. in order to bed a Circus girl? Yes, He went to Stygia to rescue Belit's Brother, he will later go to Stygia while trying to defeat Xaltotun in Hour of the Dragon, but both times he went, great need impelled him to undertake such a risky venture, and he treated it as such. Simply put, One does not simply walk into Stygia. This trip just makes no sense at all, at least not during this point in his life. Considering that he starts in Shem, and there is no reference to him having recently been in the southern kingdoms, or his days of piracy, And if it wasn't for a single mention of Conan having been to Stygia, which he visited in Conan the Rebel, I would have to assume that it took place before Queen of the Black Coast, since he is singularly not worried about going to Stygia on such a mundane trip. Considering that the only explanation I can think of to explain such a thing away, is that Conan, still bereft at the death of his lover Belit, simply doesn't care what happens to him. This explanation falls apart though, when the logical extrapolation of that would be he would simply have stayed among the Bamulas and not bothered having begun the arduous journey northwards, and especially wouldn't have then turned around and gone south again. This is a case where the simplest explanation is the best, the book is bad, poorly thought out, if still entertaining, with no reference given to any attempt at maintaining geographic logic, or consistency in Conan's travels. Ugh. I've found that basically the only reason it works here, is that Conan is still in the same general area in the next book, which actually makes some logical effort to explain why he is there.

Up Next, considered to be perhaps the best Conan Pastiche, John C. Hocking's "Conan and the Emerald Lotus"
Posted by Lagomorph Rex at 2:09 PM

I liked Conan the Gladiator OK (for what it is) I think the whole premise was to find a way to throw Conan into the same Arena battles the Romans did. Rather than have some city state do it, Green chose Stygia.

Some new city-state would have worked well enough without the whole "walking into Stygia" thing you have mentioned.

As for filler, most of the TOR Conan's are all too long for what they are-it has to be the formula and the word count I am sure TOR demanded. I probably would have liked the Robert Jordan 50% better if they had been 50% shorter.

Sorry for my own rant.

Yup, it would have been improved dramatically if it had been "Yet Another Shemitish City State" rather than Stygia. It also added in a whole angle were the Corinthians were the real power behind Stygia, and I just don't know where that comes from.. I don't remember ever reading such a thing before, or even begin to understand how that would be the case?

Actually, now that I'm looking at a map, I almost wonder if the book wasn't supposed to have been set in Koth, and Khorshemish (Rather than Stygia and Khemi) Thus continueing Conan's Journey North, but they chose instead to set it in the more "exotic" Stygia at a later date...

Definitely believe that which you stated. Your favorite reason appeared to be on the web the simplest thing to be aware of. I say to you, I certainly get annoyed while people consider worries that they plainly dont know about. You managed to hit the nail upon the top as well as defined out the whole thing without having side-effects , people could take a signal. Will probably be back to get more. Thanks
Cardsharing Server | Best cardsharing | SEO STAR SOFTWARE HOUSE

So hey. You ever going to get around to that next book?
Did just contemplating reading it turn you off reading and reviewing Conan?

2012? Ah well... I got one positive recommendation. I hope you return to blogging about this. Thanks!