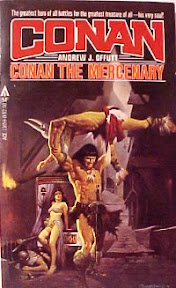 The Lord Baron of Korveka is an aged man with failing sight, but he is a man of unfulfilled ambition. It is perhaps fortuitous that a visitor from far Khitai should have sought him out and made him an offer, an offer to return an appearance of youth to him so that he might fulfill his desires. The desire to become king of Koth, and the annexation the micro state of Khauran which lay to Koth's eastern border. The reasons for this man of Khitai, this Khi Zhang having made the many thousand mile journey to an upland farm-lord in northern Koth are less opaque. He had no interest in gold, but he does have interest in favors, favors dealing with the future of Khauran. While the politics of this are less straight forward, the actual return requires but a single sacrifice of course, a slave girl will do and such a small price to pay. The ritual is over quickly, the slave girl forgotten with the return of a youthful appearance. The baron opts to assume the role of his own " Nephew" for his coming tasks and sets out to put them in motion.

Much farther north, Conan has just arrived in Shadizar. Though his soul is back in his possession, it is still trapped in Hissar Zhul's mirror, He hopes to locate some one who can put it back where it belongs. He turns down the advances of many a lady of the night in pursuit of his main goal. He reflects on the two months he wasted in Arenjun to little profit and on the location of Shadizar, Along the Road of Kings, and that the prices are high and perhaps too much emphasis is placed on Esoterica, little did he know that Arenjun was no better or perhaps less straightforward in its sorceries and vices. Conan, now matured a bit after his dealings with the undercurrent of Arenjun.. has grown to appreciate Shadizar's honesty.

He hasn't been in town long however before he observes and then intercedes in an attempted robbery of a lady of some apparent wealth. This after having only just made up his mind not to further involve himself in anyone else's problems.. so much for that. The robbery is quickly halted, and the sword laid to the would be thieves. Conan then discovers the lady for whom he has again gotten himself involved. The lady Khashtris of Khauran, traveling under the escort of her main bodyguard Shubal. After this, Lady Khashtris contracts Conan to hire some extra guards and to accompany her to her home in Khauran, thus having once again only just arrived in Shadizar he is again departing for points elsewhere. They leave the next afternoon, unbeknown to them however they do not leave unnoticed or unaccompanied.
Posted by Lagomorph Rex at 9:45 AM