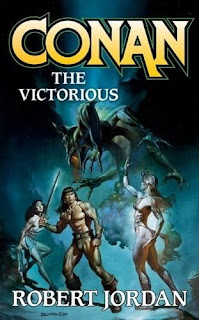 In distant Vendyha, a man named Naipal watches the city of Ayodha at night. He is the court wizard of King Bandharkar and tonight his plans either come to fruition, or crumble to dust. Tonight he will make compact with Masrock, a powerful demon. When his plans come to their apex, all of Vendhya will kneel at his feet. Especially those fools, the Black Seers, of mt. Yimsha who viewed him as unworthy.

Far to the west, in the Turanian city Sultanapoor Conan strides through the multicultural babel that is the city market. This is now the furthest east he has traveled. Over the two months that he has been here so far, he has found employment guarding a smugglers ship. It pays well, and gives him plenty of time to carouse with the locals. This however sometimes works against him, especially when those locals are also coveted by guard captains. So once again, Conan has found himself on the wrong side of some puffed up guardsman.

This problem is quickly made worse by being conflated with an attempt on King Yildiz's life. This is apparently a Vendyhan plot, they hired a northland giant to kill a prince or maybe a general, so the rumours go. Conan hearing these words decides the time has come to arrange a hasty exit. He stops by the home of a man who can help him get out of town. While he's there he pieces together a few more bits of information about whats happened, and a bit about Vendhya too.

While Conan is fleeing, A Turanian soldier is being debriefed by his superior. A spymaster of no small skill, Lord Khalid, has plans for his apprentice. Jelal the erstwhile merchant who is also a master spy for Turan. He explains some of what has happened, that it was a prince who was killed and that the Vendhyans were responsible. He's not sure if the northman had anything to do with it or not. He sends Jelal to Vendhya to get what information he can.

Conan makes his way to his boss's hideout, explains he had nothing to do with the murder and aims to get as far away from the city as possible. The ship is bound for a town at the mouth of the Zaporaska River to the south. While they are loading up, Conan becomes curious about one of the chests they are moving. He opens it and is nearly skewered by a dagger wielding Vehndyan. He overpowers the man, but seeing defeat the man kills himself. This obviously has something to do with the assassination he's been blamed for. For now though, all he can do is load up the ship and get going.
Posted by Lagomorph Rex at 1:24 PM

Its been quite awhile-but I'm pretty sure this was my favorite Jordan, in part because it seemed to be the most different from the others.

yeah so far the set up for this one is a vast improvement for Jordan. It unfortunately was also his last Conan book.. so clearly just as he's starting to get comfortable with the character he drops it in the lap of people like Steve Perry and Leonard Carpenter.

I didn't realize it was the last one, but that makes a whole lot of sense now.

Yeah it was the last he wrote following his Novelization of Conan the Destroyer.

Which is, oddly, included in his own chronology. But that makes no sense as the plot still involves Valeria and elements from the first film. Jordan just included it arbitrarily. I presume because it was his, or he was working off the pretext that DeCamp was pedaling at the time that Barbarian was an "Alternate version of events"..

But in the long view.. it would supercede, Thing in the Crypt, Legions of the Dead, and 4 Steve Perry Books.. so you have to give credit where credits due.. I'd rather read the one 200 page novelization 100 times than ever read those steve perry books again.